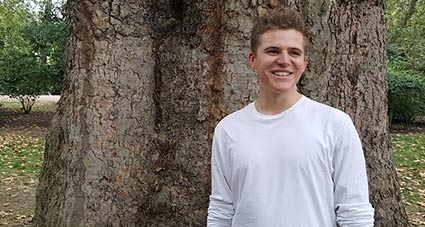 Having grown up with his father suffering from Huntington’s disease, Jack decided at the age of 18 to get tested to see if he had the Huntington's gene. He knew there was a 50 per cent chance that he had the gene, in which case he himself would go on to develop the disease.

Having grown up with a father suffering from Huntington’s disease, I know too well what it means. Huntington’s impacts everything that makes us human – emotions, thinking ability, and mobility. As parts of the brain degenerate, people suffer from severe loss of memory, judgment and capacity to multi-task. When it was confirmed I had the gene, I was miserable for months after and fearing that if I were to have children, I may pass the gene on to them.

Several years later, at the age of 21, Jack decided that he wanted to do something positive and make a difference for people diagnosed with Huntington's disease in the future. He decided to run the 2017 London Marathon to raise funds for Huntington's research.

It took some time and support from my family to adjust my outlook on life and decide to start a new chapter. Yes, I know this disease is going to throw a lot of challenges at me, but I need to start living for right now. This is why I ran the London Marathon this year for Brain Research UK. They fund pioneering research to try and help change the future for people like me. I am inspired by their research and hope that one day, we may be able to slow down or even stop this terrible disease. This is why I was so determined to help fundraise and run the marathon.’

Hope for the future

Funds raised by Jack and his family have supported research at Cardiff University, led by Professor Lesley Jones and Dr Thomas Massey. Results from this research were published in a paper in Nature Neuroscience in April 2022.

The team assessed medical data from over 7,000 individuals with HD, and then selected almost 700 of those with surprisingly early or late onset symptoms. Using state-of-the-art genetic sequencing technologies, the researchers were able to identify rare genetic variants that have a large impact on the timing of the onset of symptoms of Huntington's. One gene in particular - FAN1 - harboured numerous variants that can modify the age of onset. FAN1 encodes a protein that is important in repairing damaged DNA. The team discovered that many of the FAN1 variants in individuals with Huntington's made FAN1 less effective as a DNA repair protein, potentially providing an explanation of why these people have a much earlier-than-expected onset disease. These results open up the possibility of being able to delay onset of Huntington's by finding drugs that target these genes. As there are currently no drugs that can slow the onset or progression of Huntington's, any progress in this area would be an exciting step forward.