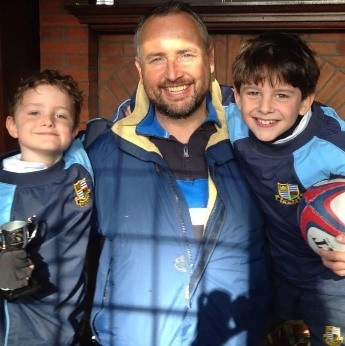 James has just turned 12 but mum Jane feels heartbroken at how different the last six years have been for him, compared with other boys of his age.

James started having ‘funny turns’ at five years old. He was sports-mad, so his parents initially put it down to either being dehydrated or needing to eat after burning so much energy. As these episodes worsened, however, his parents became increasingly concerned and sought medical advice. After various investigations they were shocked to discover that James had a golf-ball sized tumour in the left temporal lobe of his brain. The tumour had caused him to develop uncontrollable epilepsy.

“We have been under the care of the extraordinary paediatric neurology team at King's Hospital, London. After biopsy of the tumour, it was identified as low-grade, so they opted for a ‘watch and wait’ approach. I literally could not tell you how many trips we have made there for scans, assessments, telemetry, outpatient appointments. It’s so many that I have lost count. He has, on the whole, been far from a willing or obliging patient. The stress and anxiety for him was unbearable and he has offended and insulted most of the long-suffering staff we have met,” reflects Jane.

The strong epilepsy medication, combined with the relentless seizures, affected James’s memory and his personality. Some days he could read a sentence, whilst other days he struggled to read the word ‘and’. He has missed years of full-time school, struggled with friendships and has had to give up his beloved sport because he felt so unwell.

After years of 'watch and wait', it was time for surgery

After being told for a number of years that the tumour was better left alone whilst it was not growing, doctors eventually decided that the damage being caused by the epilepsy now tipped the balance in favour of surgery. The benefits of removing the tumour now outweighed the risk of surgery.

James underwent surgery in October 2017. After nine hours of brain surgery, most of the tumour was finally gone. It was identified as a low-grade ganglioglioma – a rare, slow-growing tumour that most often occurs in the temporal lobes of children and young adults and commonly causes seizures.

The difficult road to recovery

Jane says that the journey they all have been through was tremendously hard for the whole family. James is now 12, and they are all relieved that he is living the normal life of a teenager. Only on a low dose epilepsy medication, he is managing well and without seizures.

But Jane candidly shares with us the often unseen side of the road to recovery: “I cannot pretend that the experience hasn’t taken its toll on me, my husband and my older son, Harry. Quite frankly, James has been a nightmare patient! He is funny, kind and loving but the dark side of his recovery has been monstrous behaviour and mood swings.

"The social isolation for us as a family has also been a challenge but totally understandable. The mix of pain, shame and anger that I have felt at times when we have been approached by people with complaints about his reckless behavior or abusive language; the stares and the judgement I have felt when chasing him across pubs and restaurants when he has had a meltdown. It became easier to just stay at home.

"I can only describe the current chapter in my life as ‘having emerged from the wreckage of a crash, looking around in disbelief that I had survived such an impact’. I have dusted myself off and can see green shoots emerging - and this is where SassyknacksUK comes in.”

For Jane, SassyknacksUK started as a hobby, making little gifts for her friends and family. She then tried selling some items to fundraise. The important part of Jane’s healing process was an opportunity to give something back. “If it weren’t for the work of charities like Brain Research UK, many of our loved ones would not be alive today. The more funding they can get, the more lives will be saved in the future. I feel what I do is a drop in the ocean – but just look at the ripple that comes from one drop.”

James is one of around 400 children diagnosed with a brain tumour every year in the UK. Whilst some childhood brain tumours are aggressive and quickly fatal, others – such as ganglioglioma - are slow-growing and not immediately life-threatening. But, as James’s story shows, these low-grade tumours still have a devastating effect.

We need to understand more about the development of these tumours in order to get better at both diagnosis and treatment. We want to accelerate the development of better treatments for all types of brain tumour – to develop safe and effective treatments that will not only eliminate the tumour but will do so at minimal risk of harm to the patient. This is especially important in children, whose developing brains are more vulnerable to the damaging effects of chemotherapy and radiation.

Despite the significant harm caused by brain tumours – the fact that they kill more people under 40 than any other cancer, that they kill more children in the UK than any other disease –brain tumour research attracts only 2% of the national spend on cancer research. This is why we have made brain tumours one of our three research priorities. We want to improve the outlook for those affected by funding research that takes forward our understanding of the mechanisms underlying tumour development, and helps develop better ways to diagnose and treat these tumours.

Read more about brain tumours and our vital research